Female pattern baldness is a specific pattern of hair loss observed in some women. FPB is often caused by hormones, aging, and other genetic factors. This condition is also called female pattern alopecia and female baldness. 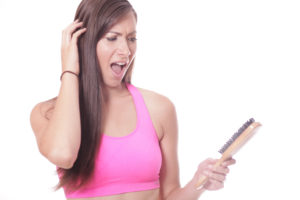 The rate of hair growth is about 1/2 inch per month. The life of each hair includes cycles of growth and rest, which for scalp hair takes around 2 to 6 years ending with hair fall out. After the falling of hair a new hair grows in its place. In a normal person, 85 percent of hair is growing at any given time and the other 15 percent is resting.

Baldness is a condition in which new hair does not grow when old hair falls or the new hair is miniaturized. The cause of this condition in female pattern baldness is not entirely understood, but it seems to be associated with genetic, hormonal changes and aging. Hormonal changes are commonly seen in the menopausal period when scalp hair is thinned, while facial hair grows coarser.

SOME TYPICAL PATTERNS OF HAIR LOSS IN WOMEN ARE:

OTHER CAUSES OF HAIR LOSS IN WOMEN

Other than genetic and hormonal causes of hair loss in women, female hair loss can be accelerated by other factors such as:

Prior to treating hair loss, all common treatable causes have to be excluded. A simple lab test can exclude many of these disorders. Rogaine (topical Minoxidil 2%) is often the first step in medical treatment of these patients. Rogaine is the only FDA approved medication that is currently available for medical treatment for female hair loss. The other FDA approved hair loss treatment in males, Propecia, does not show any positive results in women.
Other hormonal treatments have shown some results especially in women after menopause.
Hair transplant surgery gives great results; however, many women with female pattern baldness are not good candidates for hair transplant because the donor hair area is also involved with the process of the baldness and hair miniaturization.
People who read this article may also want to read 5 Step Management of Hair Loss in Women